Rheem would have to be the most recognised hot water system brand in Australia thanks to their hugely successful “Install a Rheem” marketing campaigns in the 1990’s. The Install a Rheem slogan is still used today. Rheem is Japanese owned by a company called Paloma Co Ltd but continue to have an Australian Head Office and have been in Aus since 1936.

Rheem also own brands such as Aquamax, Vulcan, Solahart and Edwards.

Over the years, Rheem and it’s other hot water brands have been bought and sold many times. At one point they were owned by Australia’s BHP but they sold Rheem in 1988. The changes of ownership has caused fluctuations in both prices and the design of their products. Tank sizes have changed alot which means it is sometimes impossible to retrofit products.

We provide 24 /7 Hot Water system repairs, installations and servicing for all Rheem hot water systems. Our areas of service cover all areas of the Campbelltown-MacArthur area.

Our rates are affordable and wherever possible we will provide a price estimation on the phone.

Our technicians are highly trained in all aspects of Rheem hot water repairs and installation. 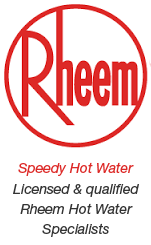 Hills Hot Water provide sales, installation, servicing and repairs to all models of Rheem Hot Water Systems to our customers throughout the Hills District.

Please contact us for your Rheem Hot Water System enquiries.